GLOBES, an Israeli financial newspaper published an article about Eitan Eldar, a well-known financier, and his new business ventures in London.

Eitan Eldar is has brokered sales of thousands of housing units in London and made deals for buying and selling apartment blocks. Most of it was in less central areas of London where the middle class resides. 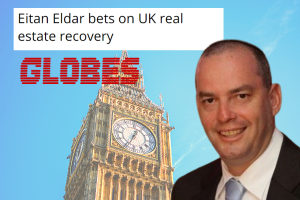